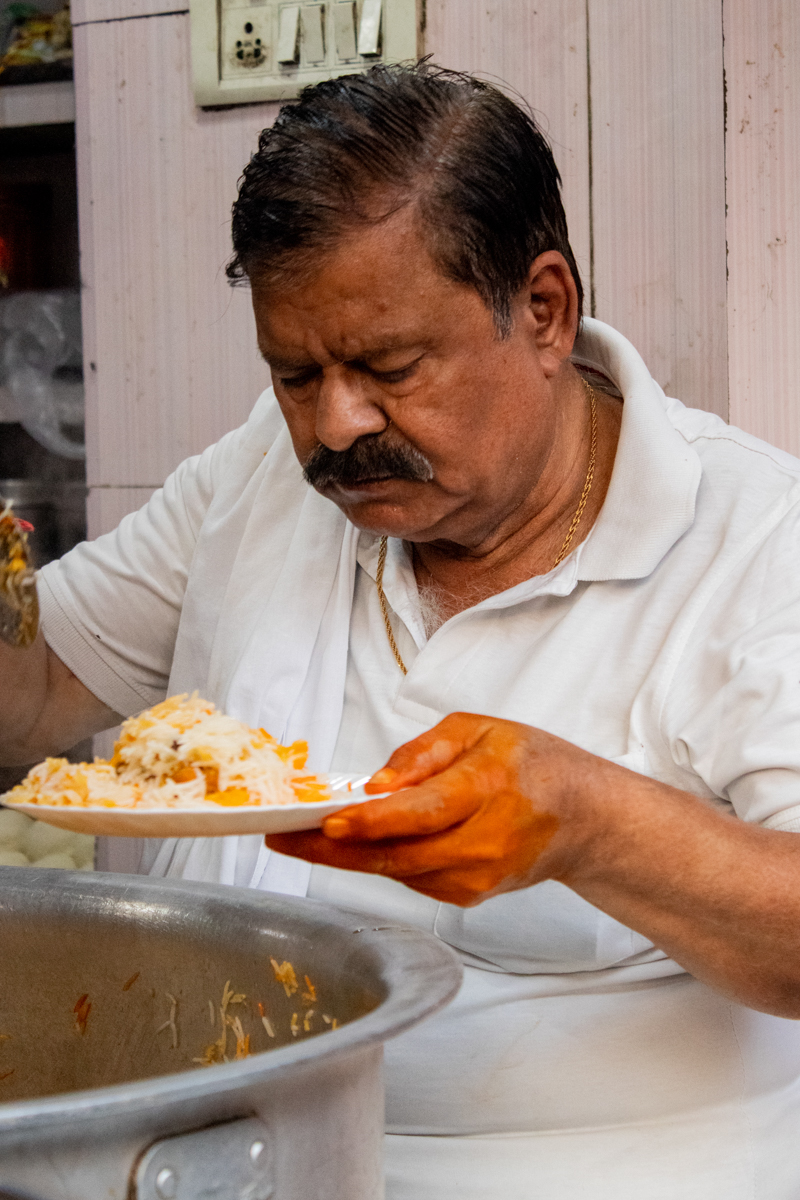 Vijay Shankar Verma, better known by his nickname Lalla was born in Shahjahanpur, but grew up in Lucknow. His mother died when he was in high school. He dropped out so that he could earn some money to support himself and his little sister. He set up a paan shop, followed by a stall selling green peas, but could not make much. About 35 years back—he would have been 30 then—he went to watch a film at Sahu Cinema. He noticed a number of hand carts selling biryani near the theatre. He doesn’t remember the film he saw, but the sight of the hand carts gave him a moment of epiphany that would change his life. The next day, he went to see his friend Abrar, a professional chef. He badgered Abrar to teach him how to cook biryani in the traditional manner. Abrar accepted Lalla as his apprentice. The first day he gave him a list of ingredients to buy and said: “get all of this and come back tomorrow.” For the next couple of months, Lalla served his apprenticeship, working for 12 hours a day, every day. Then the big day came when he set up his stall in Chaupatiyan, with barely 3 kilograms of biryani to sell. The traditional taste and a price of ₹ 2.5 for half a plate was much appreciated. Twenty years of hard work enabled him to buy a fixed shop of his own. Today, a plate of his biryani sells for ₹ 160. With evident pride, he says: “I can eat leftover food myself, but would never serve it to a customer. We don’t sell tomorrow what we have cooked today. We finish off whatever we cook the same day—whether it sold for a price, or given away to someone in need.” He continues—“There have always been connoisseurs of good food, but attitudes have changed now. But whoever comes to us always returns with two more customers the next time! All our customers are celebrities for us—they burn fuel worth ₹ 200 to come and eat biryani worth ₹ 100. Whatever can be stronger evidence of their love?” The conversation moved on to ‘carving the biryani.’ Traditionally, biryani is cooked in layers of rice and meat. It is something of an art to serve out a plateful, as the upper layer of rice has to be ‘carved’ through; to first place a piece of mutton from the lower layer on a plate and then cover it with layers of rice of different colours. Lalla ‘carves’ biryani with a flair that makes it look like a sport. Crowds collect to watch and applaud him. Talking to him is an experience in itself. His parting shot as we take our leave—“I am now just the Director of this firm, it is our Sonu Bhaiya who is the Manager of Lalla Biryani.”